Brian Eno's music has been referred to as 'audio perfume'. His biographer, David Sheppard, described it during a radio interview with TTBOOK like this:

"... he had slowly moved towards this beat-less mood music which was closer to a sort of perfume then it was to music..."
"... it sort of tinted the atmosphere sonically and he coined the term ambient music..."

I love this idea of sound as tinting the air around us in the same way that perfume does. When thinking about sound or scent as tinting the air, I can't help but think of not only pleasurable sounds and smells, but also those which are invasive and unwanted. You can close your eyes, but you can't close your ears... or nose... :)

In thinking of how to achieve this in a very body-oriented and wearable hardware way, the little brass-coloured piezo elements were the first things that sprang to mind. Where each element embodies a note that hangs on the wearer, surrounding her with her own ambient sound. A sort of "piezo perfume", if you like. Updates here, as they happen...

The dress had its debut on the catwalk at AWE (Augmented World Expo) 2014 in Santa Clara, California. The Fashionware wearable tech fashion show was organized by tech promotors Living in Digital Times.

Here are some photos of Sound Scales at the Fashionware/Living in Digital Times event taken by Carol Seelig Eastman. The model is Kevyn from Scout modeling agency.

You can see more photos and a video of the show on the Fashionware AWE Gallery page.

The sewing on the dress is finished! Here it is! 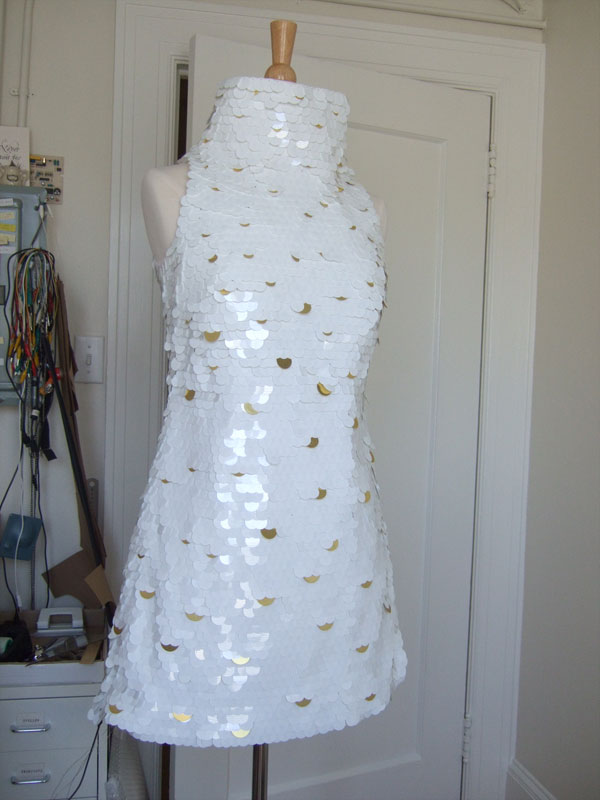 The piezos are driven by a separate LiPo battery, but all the Arduino needs is a 3V coin cell, yippee!

Now the only thing left to do is finish the programming, and then drive the sounds using a smart phone and bluetooth.

Who would have known that sewing and soldering hundreds of piezos would take so long! Still, it's coming together rather nicely...

I found some fabulous paillette sequin fabric in LA and this will now be the basis of the dress. It saves me sewing on 1000s of sequins (I will still be sewing on 100s) and has a kind of retro-futuristic look to it that I like. Plus - it's scaly!

The piezos will be more or less evenly distributed now in order to provide a neutral canvas for composers and sound designers to work with.

Wow, this project has been on the back-burner for way too long. I think I will really regret it if I don't make this, so I've restarted, now that I have my new workspace set up (half-way across the world from my old one - that's why it's taken so long!).

Below, the final sketch of the dress. It will be about 50% covered with meandering piezo clusters. Yes, I'm a maniac. And the toile with practice placement piezos and boards.

I've finally found some time to work on this the last few weeks and I've spent a good few hours bashing my head against these shiny little piezos. My first idea was to control them using a 595 shift register, but with very little success. I got some weird vibrations coming out of the piezos, quite nice, but absolutely zero control.

Then I asked the META (Making Electronic Thingees in Amsterdam oracle for help and Marc suggested I try using a cd4017 decade counter instead. I happened to have a few of these lying around, so once I got my head around the basic idea, I gave it a try.

The basic idea is that 10 piezos are attached to a single Arduino PWM pin. The ground pin of each piezo is attached to one of the decade counter pins via a transistor. This means that it's floating, until the decade counter sends the signal to the transistor to connect it to ground. At that point, the piezo becomes the only one in the group able to make the sound. Yes, it is its chance to shine! :D

Here's proof that it works - I only hooked up 4 piezos for the test, but the decade counter supports 10. I programmed it to play a simple scale, with each note timed to sound with the step to the next pin/piezo on the decade counter.

Here is a great resource for how the cd4017 decade counter IC works.

I want to be able to sew the piezos quickly, but also in a way that they create a flexible, scale-like surface on the fabric. The best way to do this seems to be simply drilling a hole in the metal. 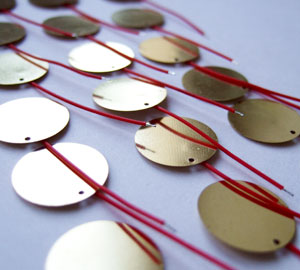