In February 2012, I was very lucky to attend TEI 2012, a conference on Tangible, Embedded and Embodied Interaction in Canada. I was invited there to present TK730, a collaborative work with three other artists.

One of the conference highlights was the Flexible Circuits Workshop by Aneesh P. Tarun and Peng Wang from the Human Media Lab at Queen's University in Kingston, ON. In the workshop, we learnt how to etch our own thin flexible PCBs! 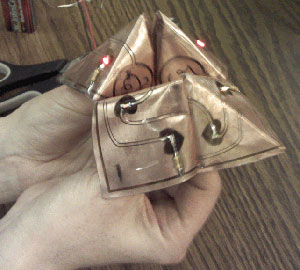 Our group made this color-chooser with LEDs.

Spreading the word, I gave a 'lightning talk' about the workshop in March at the Open Hackspace Day at NIMK. There, I met Peter Tettelaar from Otheruse, who was interested in taking the idea of foldable and flexible circuits even further.

Since then, Peter and I have been brainstorming about ways to experiment with flexible circuits for wearable applications. We helped a team of students at the Hague University of Applied Sciences produce a market research report on wearable electronics and drafted up a collaboration program. In the end, we've decided that what we'd really like to do is make something using these technologies! So we've started research and design.

Leah Buechley, developer of the Lilypad Arduino, has done a lot of research into circuits on different surfaces and substrates. Her Flickr stream shows a professionally produced flexible circuit. We've started experimenting with the same technology and how we can incorporate it into a flexible, wearable and hopefully hackable fashion item.

This is an extremely sneak preview of Peter's circuit design. The single-sided printing method has its limitations, of course, so he's taking advantage of the flexible nature of the substrate to tackle these challenges by cutting and folding the circuit. I suspect this photo was taken late at night in the secret underground Otheruse lab. ;) 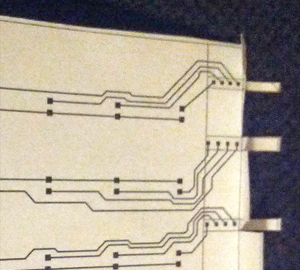 Last week I did some more tests with embedding LEDs on flexible strips into 100% wool felt. Three different effects: diffusion with felt, vinyl and no diffusion. Quite happy with the results.

Here are the first tests with the "t-shirt" heat press using standard settings and two different kinds of vinyl (one is technically not PVC, so less bad for the environment). I also tested some of the Inkjetflex samples under vinyl and it sticks very well!

Shown are some tests with flexible LED strips - the vinyl doesn't really adhere to this so well and doesn't look very durable. The diffusion effect is very nice, however... :)

We've decided to make a wristband to start with as this fits many body types and has many possible applications. It should fit a range of wrists, but not be too large and clunky, or we might as well just miniaturise everything and make a watch design.

Peter will have to design the circuit within the boundaries of my pattern, if possible! Our first idea was to design the circuit to be completed/connected when the wristband is closed or attached to the "dock". After more discussions, we're not sure this is the best idea as we want to give the wristband context when it is being worn and also make it possible to daisy-chain more of them together.

The connectors are magnets and define size S, M or L. Size smaller wearers can cut off extra connectors.