See-thru-me is a top that gives the illusion of light shining through the body. When a light source is shone on the back of the wearer, leds on the front of the garment light up. 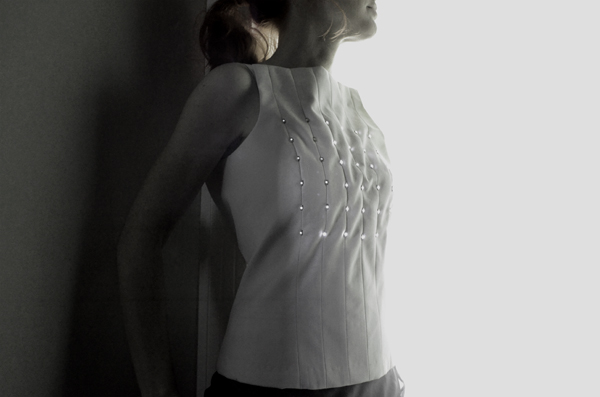 That was quick - Peet has edited the video and set it to music. It looks awesome!

see it in action

Last weekend Peet, Jenneke, Magda and I went up to NSDM to make some videos of see-thru-me in action. I'll post the video here once it's edited, but meanwhile here are a couple of stills. More at Peet's Flickr stream.

The top consists of 36 separate simple circuits, each with a light dependent resistor controlling the brightness of an led.

Inspired in part by the idea of cartoon bullet holes letting light shine through the body, see-thru-me was originally intended to be made with a matrix of colour sensors and rgb-leds. The wearer would stand in front of a tv playing cartoons and the colours would be visible on the front of the garment. This turned out to be a hugely ambitious project, so the see-thru-me "economy version" was born.