The aim of the Greetometer Handshake Trainer is to have computers to teach humans how to give better handshakes.

The Greetometer measures three aspects of the handshake: angle, grip and sweaty palms. Feedback for the angle (balance) is given via two small vibration motors on the back of the hand. The motors guide you to roll your hand clockwise or anti-clockwise. Feedback for grip is given audibly with a small piezo element. Grip too hard or too softly and the alarm sounds. Sweaty palms are measured on a colour range.

The handshake glove - I'm calling it the "Greetometer" - is finished!

Here are a few photos of the embroidered circuitry of the new prototype:

progress: back to the drawing-board

Progress on the handshake trainer was put on hold because I was focusing on the apology helmet. Now that it's finished, I'll be concentrating on the glove.

After a review with AnnaMariaCornelia, we decided to continue to make the glove a test for the wearer, not the second party in the handshake. This makes the wearable piece more "personal" and is more in line with the original concept: to have technology enchance human behaviour.

The glove will measure the handshake with three separate functions:

After a lot of thinking about this project, I think I might need to take a different direction. Here are some of the main problems I've encountered so far:

I'm now considering whether the glove should perhaps test the handshake of the shakee rather than the shaker. Um... what I mean is that the feedback is provided not for the person wearing the glove, but the one who shakes the hand of the glove-wearer.

Not only does this make it a lot easier with fitting (I can make it a medium size with a bit of room for adjustment), it makes placing the pressure sensors easier. It also means that the electrodes won't be inside the glove in a potentially sweaty environment. But most importantly, it means that the person whose handshake is being tested will start in a more neutral state. In fact, they don't even have to know what the device is for until after their handshake has been tested. The glove will provide an un-biased assessment of how the handshake might be improved.

Below, some pics of the prototype:

After a few tests with the previous prototype, it became clear that the pressure from the handshake grip couldn't be accurately measured from across the palm. The grip should be tested across the fingers at approximately the middle joint. More testing is required for this, but I've built a new prototype to start gathering data. I'm hoping to be able to test for sweatiness across the palm by measuring the galvanic skin response with electrodes.

Awesome! I just made a GSR (Galvanic Skin Response) sensor following these guidelines: http://cwwang.com/2008/04/13/gsr-reader/. I didn't bother wading through his Processing code, just tried it out with the standard Arduino AnalogInput sketch and I'm getting readings dependent on the humidity levels of my skin! Needs testing and calibration, of course, but still very exciting. Plus, the electrodes only cost one euro-cent each! 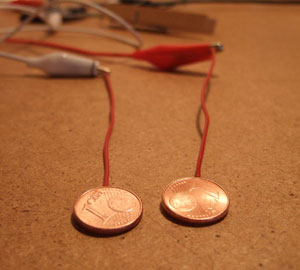 I've looked into how the handshake trainer (helping hand?) can best be designed:

The main conflict between the design and the research is that eye-contact is considered as much a part of the handshake as anything else. This means it won't be a good idea to have the feedback "realtime" as i originally wanted. The handshake trainer will now "record" your handshake and then give you a report on how you did.

Here is the first prototype of the basic design. I will now try this on as many different sized hands as possible to make sure it can be worn by a wide range of people.

Of course there's a bunch of stuff online about how to give a good handshake. This one is pretty funny and could definitely be understood by a computer. :)

Anyway, it's generally agreed that the characteristics of a good handshake include: